SNIPPETS OF HISTORY THROUGH THE EYES OF CARTOONISTS

We are pleased to present a small selection of political cartoons our museum acquired as a donation from the family of collector, Mr. Juozas Navikėnas of Montreal, Quebec, Canada.

Mr. NAVIKĖNAS scanned a variety of North American and international print publications from 1946 to 1956 and selected several hundred political cartoons that, through humour and caricature, reflect very serious, impactful world events.  Every piece was carefully clipped from publications and mounted into a scrapbook.  The collection was encased in hand carved wooden covers made by him.  The care and attention taken by Mr. Navikėnas in assembling this special collection reflects his own worldview and demonstrates what caused him worry and what issues he most identified with, as a person forced to flee his native Lithuania and live his life as a World War II refugee.  It is also a reflection of political events unfolding on the world‘s stage during World War II and immediately following the end of that war – the consequences of which have shaped the world we live in today.

This selection chronicles, through the medium of cartoons, world events from the end of World War II (1948-9), through the reign of Joseph Stalin in the Soviet Union, to his death in 1953 and the start of the rule of the Soviet Union by Khruschev as of 1953.   The selection records cartoonists’ reactions to Soviet expansionism and occupation of various countries.  It touches on the establishment of the two Koreas.  It chronicles the efforts of China to gain membership in the United Nations.  It comments on the Cold War and efforts to reign in the atomic race, as well as efforts taken to promote world peace.

For presentation here, we have selected cartoons that fall into three major themes.  They are echoes from the past – the post WWII era, with relevance to our present day world: 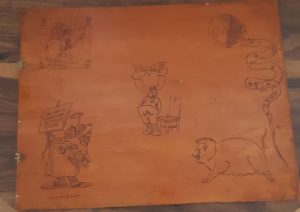 We will let the cartoons speak for themselves but first, meet Juozas Navikėnas and John Collins.

JUOZAS NAVIKĖNAS (1900-1959), Montreal, Quebec, Canada was born in 1900 in Prienai, Lithuania.  He began a distinguished military career by volunteering for the Lithuanian army immediately upon completion of high school.  He continued his military duties until the German occupation of Lithuania.  In 1944, upon the impending Russian occupation, he and his family left for Germany where they ended up in Displaced Persons camps.  He emigrated to Canada in 1948.  He lived and worked in Montreal, Quebec where he pursued woodworking as a hobby, and was active in the Lithuanian community until his death in 1959. 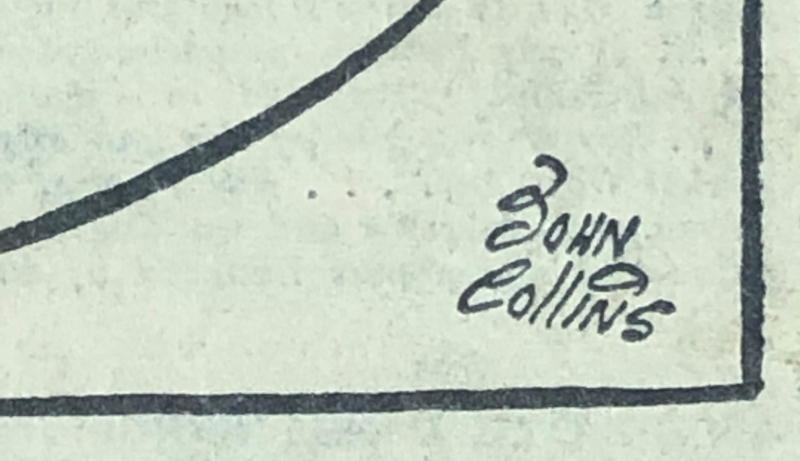 JOHN COLLINS (1917-2007) is a Canadian cartoonist whose work features prominently in Mr. Navikėnas’ collection.  Mr. Collins was one of Canada’s foremost cartoonists and produced more than 15,000 works published in Montreal’s “The Gazette” over a 40 year long career.  As witness to important national and international political events of the mid-20th century, John Collins was considered to be a bona fide journalist not just a cartoonist – informing and educating his readers about events rather than simply poking fun.

Sources:  The collection includes cartoons published between 1946-1956 from the following publications (not every cartoon in the collection is identified by publication):  The Buffalo Evening News, The Chicago Herald, The Christian Science Monitor, The Hartford Courant, La Presse (Montreal), The London Evening Herald (Canada), The Los Angeles Mirror, The Manchester Daily Dispatch, The Melbourne Herald (Australia), The Minneapolis Star, Montreal Gazette, The Newark News, The New York Times, Punch, The Washington Post.