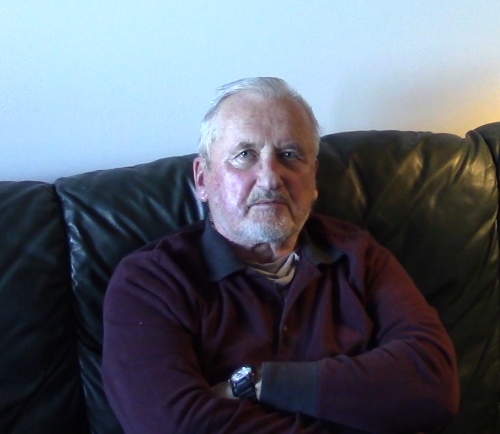 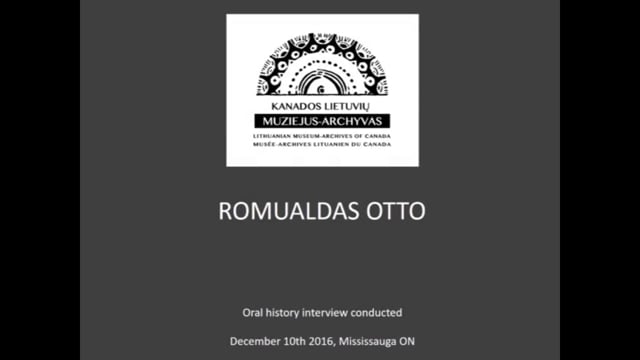 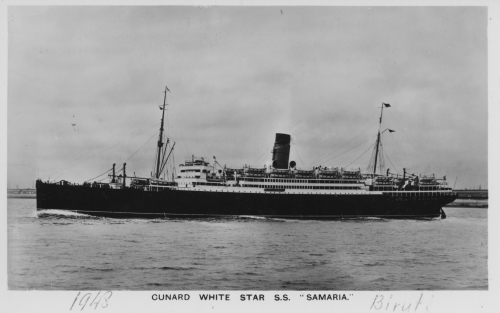 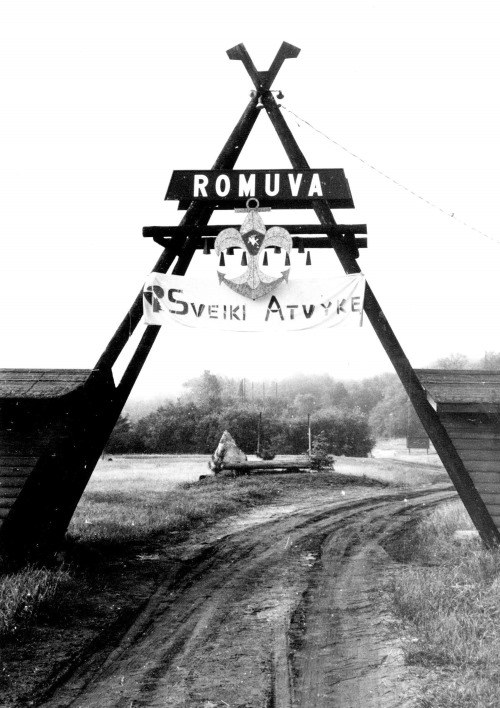 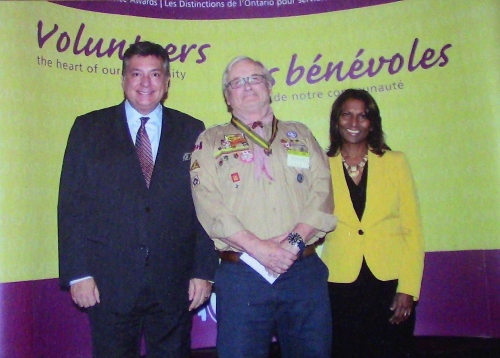 Presentation to Romas Otto, volunteer in the scouting movement 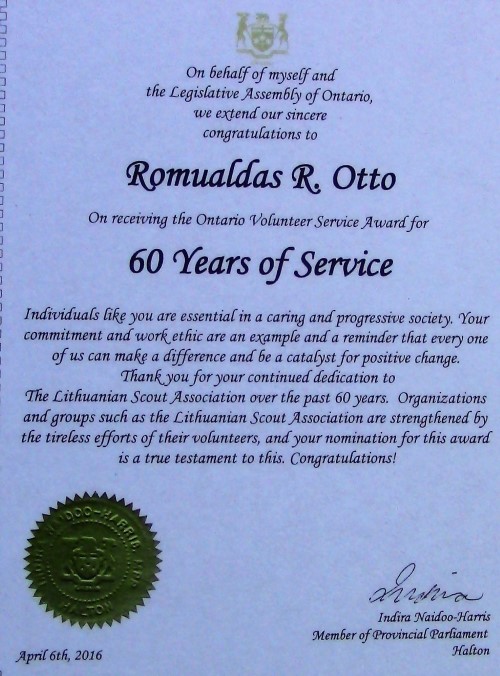 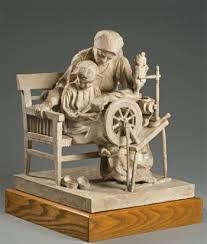 I was born in 1935 in Kaunas, Lithuania.  We lived in Aukštieji Šančiai, Prancūzų gatvė nr. 9, Kaunas.  I graduated from Concordia University in Montreal and did post-graduate work in history.  For 40 years I worked as Director of Compensation and Manpower Planning with Canadian Pacific.

Prisoner of war camps began to appear regularly in our neighbourhood – there were fields of them, fenced in by barbed wire.  The prisoners lived on the bare fields. The winters were so cold they would scream from the pain as they froze to death. I would hear the screams constantly, as our house was just on the other side of one of these fields. The Germans did not have enough food for themselves nor for the prisoners, so they would regularly kill the Russian prisoners.

We would often see the Germans moving their tanks into the 9th Fort.  My Grandma would say – look at how clean they are. When they took down a campsite, there would not be a single piece of garbage left in the field.

My Father escaped from Lithuania – he found out that someone had betrayed him.  My Uncle Felix had a cabaret in Kaunas that was frequented by German security officers.  One of them told my Father that the Gestapo is after him. Uncle Felix told Father to sign up with the labour brigades and head for Germany and so he did.  That is how Father ended up in Vienna where he got work in a printing press. The rest of us remained in Lithuania.

By 1944 the Front had advanced and was very close to our home.  Hubert Walker, a German who had befriended our family, helped us get tickets on the volksdeutsch train to Vienna.  It wasn’t difficult as our surname was German.

When we passed through Dresden – the entire city was burning.  The train stopped. The entire sky was red from the flames. Dresden had been leveled to the ground as a result of continuous bombing by the English and the Americans.

During the journey we stopped a few times.  They changed the rail cars. Everything was very organized.  Hitler youth brought us food – sandwiches and soup. They helped us, as we were considered volksdeutch.  When we arrived, Father was waiting for us on the platform in Vienna’s largest train station, the Hauptbahnhoffen.

We were housed in aviation military barracks in the Kempten lagers near Memmingen.  We were in the 5th block together with other Lithuanians. Estonians were in block 3 and the Latvians in block 4.  The next block over was for people from various other parts of Russia – they rode horses inside the camp.

Schools were established so that the children could continue their education.  Folk dance troups, choirs, community events, concerts, sports competitions, various organizations, e.g. scouts began functioning.  Life was pretty good for the children except that we had to avoid the areas around the runways as they were seeded with landmines. We lived in the camp for 3 years.

When Father decided it was time to emigrate, our biggest fear was that we would be returned to Lithuania.  Russian refugees were regularly being returned by force, especially by the Americans. They would come in their American jeeps, wearing their blue caps and call all the men together and ask: “Why are you not going back to your homeland?”  The Americans just wanted to get rid of the refugees as soon as possible. When the Swiss took over our area, they stopped forcing people to return to their homelands. But, this practice continued in the English and American zones. The French also gladly returned refugees.  A friend of mine was taken as a prisoner of war by the French. They gave him a choice: either return home or join the French Foreign Legion. He ran away and joined a monastery where he was left in peace.

We sail to Canada:

When we decided it was time to emigrate, Father went to the Red Cross to find family in South America, America or in Canada.  A distant cousin of Father’s, Rudolfo Otto had been found in Tavistock, Ontario and he sponsored us to come to Canada.

We sailed on the “Samaria” from Bremerhaven.  It was Fall of 1948 and the seas were extremely rough.  We got oranges. Many people could eat nothing they were so seasick, so we would collect those oranges and devour them.  We landed in Quebec City. I clearly remember the Chateau Frontenac. We disembarked and everyone was registered and given $5.  Since we had a sponsor waiting for us, they immediately put us onto a train and we rode and rode for a long time. We were very hungry.  At one of the stops I saw a cart loaded with white buns and bottles of milk. So I spent my $5 on those white buns and milk and devoured them on the train – I then spent the rest of the trip on the toilet.  Welcome to Canada!

We got off in Toronto where Uncle Rudolf was waiting for us with a brand new red Chrysler.  I got to sit in the front with the radio playing and the seats smelling of leather. I was in heaven!  Rudolf could speak a little bit of Lithuanian so we were able to communicate. What a grand first impression!!!   We lived with him in Tavistock for a short time and then moved to Montreal.

I married in 1963 and established a life in Montreal..  But my Father and Mother moved to Toronto where Father got a job with the Lithuanian weekly newspaper “Lights of Homeland” (Tėviškės Žiburiai).

I found the French in Quebec to be very helpful to new immigrants.  They were not afraid of us. I never felt any discrimination. We were welcomed, especially since we were mostly Roman Catholics.  Our Lithuanian parish pastor Rev. Kubilius went to Cardinal Leger to ask if we could move our church, Lady of the Dawn (Aušros Vartu) from the warehouse where we currently held services to a new location.  He asked for land on which we could build our own church. With Leger’s help we got land right near the Metro station and built the church that stands there to this day.

Canada gave me my education and Canada fed me.  My Father used to say: “Know whose bread you are eating!”  I am a Canadian, but I feel a duty towards Lithuania. I would defend it if it ever needed defending.  However, I am too old for that, but I carry a deep sympathy toward Lithuania. I enjoy being with Lithuanians and I love speaking Lithuanian.  I am now a Canadian of Lithuanian heritage – a Canadian-Lithuanian.

Lithuania, despite being small, managed to withstand Russian attempts at annihilation.  The most profound symbol of our resistance is found in the image of a mother sitting at her spinning wheel teaching the child beside her in secret to read from a forbidden Lithuanian book.  It is the Lithuanian women who have kept our culture alive – very much in the same manner as the Church kept the French culture alive in Quebec. Even though we are a tiny nation, we managed to establish an independent country in 1918  and again in 1990, in spite of Russia’s attempts to destroy our culture, language and traditions.

To our youth I would say: your ancestors came from an honorable and very energetic past.  Be proud of them because, although they were small – they beat giants. They are a determined and stubborn people.  Be proud that you are a part of them.

Canada’s immigrants played a huge part in building this country.  But in 20 years there will no longer be any Canadian Lithuanians. The process of assimilation takes over.  You see this best in Canada’s French. They say cultures survive when they are threatened. If we have a good living, forget everything, have a drink, enjoy yourself...  But, if you are facing extinction, you will survive, because you will fight to keep it alive.