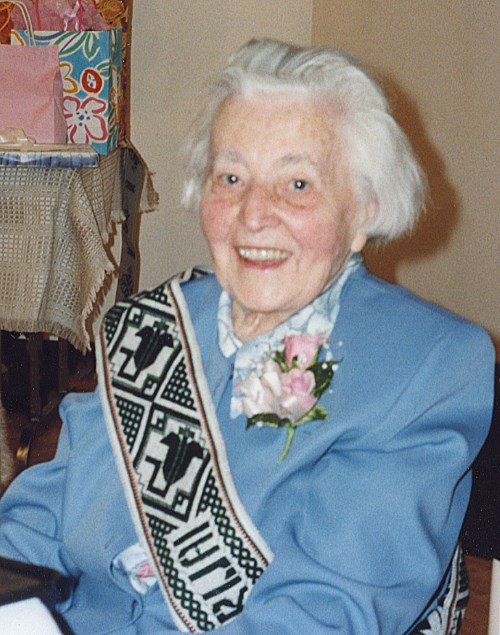 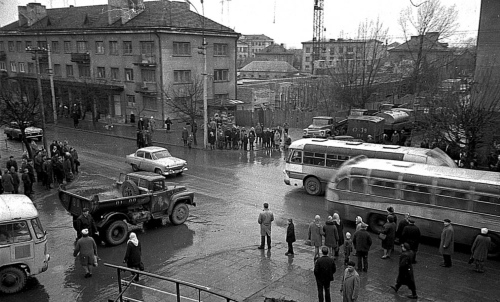 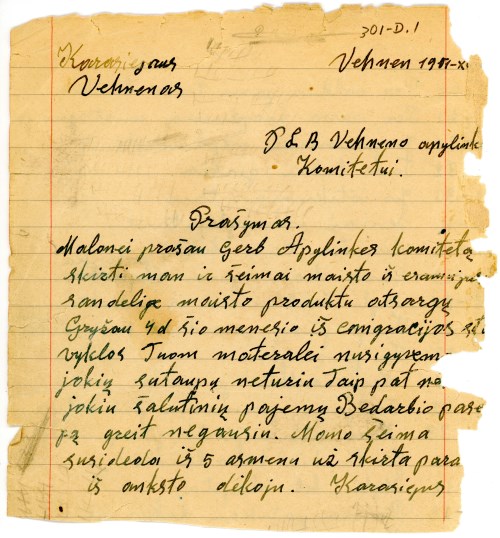 On July 30th of 1944 we walked out of our home town of Vilkaviskis on foot.  The planes were already dropping bombs everywhere and the fields were full of people fleeing for their lives.  We walked 10 kilometres to the village where our parents were and lived there for a few weeks.  Eventually planes  came there too and started bombing. The bombs burned many homes and killed many, many people.

On August 18th German soldiers moved into our house and forced us to leave.  They established their regional military headquarters there.  We loaded a wagon with clothes and food, took a cow, some geese, pigs and our dog with us and set out on foot.  During the bombings, we hid in trenches while the Germans bombed from one side and the Russians from the other.

On August 22nd we arrived in Nevidure, near the border with Germany.  We still hoped that we would be able to return home and  that all this was temporary, so we did not want to travel too far away.  We lived in an abandoned farmer’s house.  We returned to our home with our wagon to bring back more of our things.  But on our third trip back things changed – there were no more civilians left in our village and it was overrun with German soldiers.  Trenches were being dug in town.  The road leading to our farmer’s house was blocked.  While our families in the wagon were delayed by the soldiers, two of us took off into the fields and hid amongst the stacks of wheat.  Under the cover of night we rejoined our families.  The bombings continued and they set homes on fire, so we had to move on.  The front continued to advance.

Our barn is set on fire and we flee into Germany

On October 16th they set the barn that we were hiding in on fire and we had to flee.  That night we crossed the border into Germany and never saw our homeland again.

We came into Danzig.  The place was crowded with people fleeing.  Some were directed to go right, others to go left.  We walked and walked and often had to sleep in open fields.  We would put the children to sleep inside the wagon and the adults would sleep on the ground underneath the wagon.

On February 12th, 1945 we arrived in the town of Lage and reunited with our parents.  9 people lived in one small room and yet they took us in.  This situation was untenable so we asked the officials for larger accommodation for our large family.  They said the town is overflowing with refugees, but found us accommodation on a farm in the village of Kobro.  We got a larger room and food ration cards.  We lived there for a few months.  Soon afterwards, we learned that the front was advancing towards us and that people from Lage were already beginning to flee.  My brother Izidorius that night convinced us to flee right away and so we left.  The roads were teeming with people – they were so full that we could only crawl along slowly.  After a few kilometres we began seeing German soldiers dropping their guns into the fields and fleeing.  We asked one of the soldiers for his horse and he gave it to us in exchange for a rasher of bacon.   After another half day of walking we came across soldiers waving white flags and a troop of English soldiers on motorcycles.  It was the second day of May.  Planes were maintaining the truce from the air and prevented any shooting incidents.  The German soldiers were taken as prisoners of war and we were told to get out of there.  So we went on the road again.

Soup and clothes rations in Lubeck

On June 10th we arrived in Lubeck.  Here we found many Lithuanians – and many people we knew.  We were fed from large cauldrons of soup and dry goods were rationed out to everyone. They also rationed out clothing for anyone who needed them.  Clothes and packets of food arrived from the United States and Canada and we treasured them.  The Lithuanians living in this area were well organized and had established committees who took care of the Lithuanian refugees.  Lubeck was a beautiful city with a grand river running through its centre.  There were movable bridges, pedestrian walking paths, rides along the river in steamboats.  It was very picturesque.

Camped in bombed out Hamburg

On August 6th we arrived in Hamburg.  The situation here was very different from what we had left in Lubeck.  Hamburg was a large city that had been totally bombed out – everything was destroyed and lying in ruins.  We could not get through with our wagon and horse.  After 3 days we moved on.  On August 14th we arrived in Oldenburg where just outside the city we found a huge Lithuanian refugee camp.  It was overcrowded, so we had to sleep under the stars for the first 3 nights until we got a room that we shared with several other families.  We slept in bunk beds and strung up blankets to provide a bit of privacy. Here we received clothes, food rations, packets from the USA and Canada and could grow our own vegetables.  Once again, the Lithuanians had organized themselves: we had committees, a pastor, a chapel, a hospital, schools, a post office, etc.  Life was not too bad here.

People started registering for emigration to England and Australia first and only later were we allowed to register to go to Canada.  Men signed up to work in forestry, mining and on tobacco farms.  Women signed up to work in hospitals, as domestics or as seamstresses in factories.  You had to complete your work contract in exchange for the cost of bringing you over from Germany and then you were free to go and to work wherever you wanted.  First priority for emigration was given to single young and healthy men and women.  Families were not wanted and were last on the lists.  Often families were separated as a result, with the older children going off to strange lands alone to work and once their contract was completed and they had saved enough money, they would then sponsor their families to come and join them.

On June 6th 1948 my two brothers left for Canada to work in the gold mines in Timmins, Ontario.  On February 10th 1949 they were able to sponsor our parents to join them in Canada.  Our parents went and eventually everyone moved from Timmins to Toronto.

The last ones left in camp

My husband and I and our children were the last family left in our refugee camp, so on November 2nd, 1949 they moved us to a camp in Vehmen, further away from the camp in Oldenburg.  We had several rooms to ourselves, since most people had left.  We survived by foraging for berries and mushrooms in the nearby forest.  We also kept chickens and pigs.  In the fall we would work on nearby farms harvesting sugar beets and potatoes – so we were able to make a bit of money and received packets of goods from my parents and brothers in Canada.  We signed up to go to Canada.

On May 24th 1950 we were transferred to a camp in Fallingbostel.  It was full of many ethnic groups.  We were called for inoculations and medical examinations regularly.  We lived here until the transfers to various camps started: between 1950 and 1953 we lived in 7 different camps in various parts of Germany.  My husband Bronius had bad lungs and they would not let us emigrate.  Eventually he lost hope and feared leaving Germany – he would say he won’t be able to find a job because of his bad health and not knowing English.  He feared he would be unable to support his family.  Finally in January of 1953 we were summoned by the doctors in Hanover.  Apart from his bad lung X ray, everything else was clear and we would be good to go if he could provide another clearer X ray taken at our camp’s medical centre.  So we returned home that evening quite exhausted and emotionally drained.  On January 19th, 1953 Bronius passed away from a heart attack in the middle of the night.  On January 22nd we buried him in the Lithuanian corner of the Catholic cemetery in Oldenburg.

We set sail for Canada

Finally, on April 23rd 1953, just before Easter, we were summoned – our request to emigrate had cleared and we were to leave Germany from Hamburg on a transatlantic ship named “Mrs. Italia”.  On April 25th we arrived at the docks and saw our 10 floor high ship for the first time!  It was over whelming!  When we set sail for Canada, a band on board played “Auf Viederzein” and with tears in our eyes, we bade farewell to Europe.

I got terrible sea sickness and could not eat, so I spent most of the 9 day journey in bed in my cabin.  The children were not sea sick and spent the days exploring around the whole ship.  They enjoyed the service and the excellent meals in the fancy dining rooms.  On the last day of sailing we were given ten dollars for our personal expenses and told to pack our things as we will land in Halifax the next morning at 7AM.

We disembarked in Halifax and assembled in a large hall where they checked our documentation and hand baggage and gave us train tickets.  We immediately boarded a train that departed at midnight from Halifax.  It was dark so we saw nothing.  Finally sleep overtook us and we awakened next morning to first light.  We eagerly explored our new surroundings in this strange land through the windows of the train.  What we saw was not encouraging – dark forests, dried out trees, burned out grasses, small cheaply built houses here and there.  On May 7th, 1953 we came to Quebec City – this was encouraging.  The views of the city were beautiful.  Houses were pretty and decorated with flower gardens and flourishing evergreens.  And when we arrived in Montreal in the evening, the cross on the hill was alight with flickers of light bulbs in the evening dusk/  It was a beautiful sight to behold.  We slept overnight on the train and the next morning transferred to a train that took us to Toronto.  Here we were met by my parents and brother’s family.  We were overjoyed that our terrible journey had finally ended and we were once again reunited with our family.  We started our life in our new country seated around a table in their home to share our first family dinner in Canada.