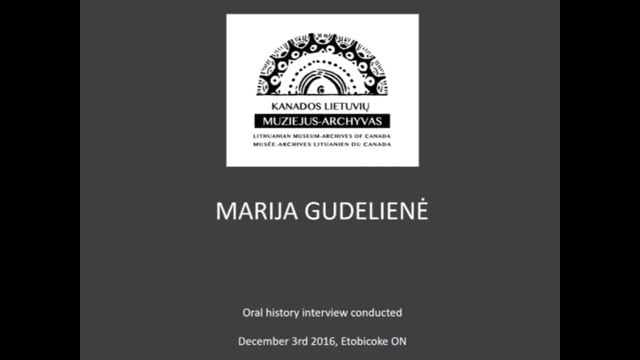 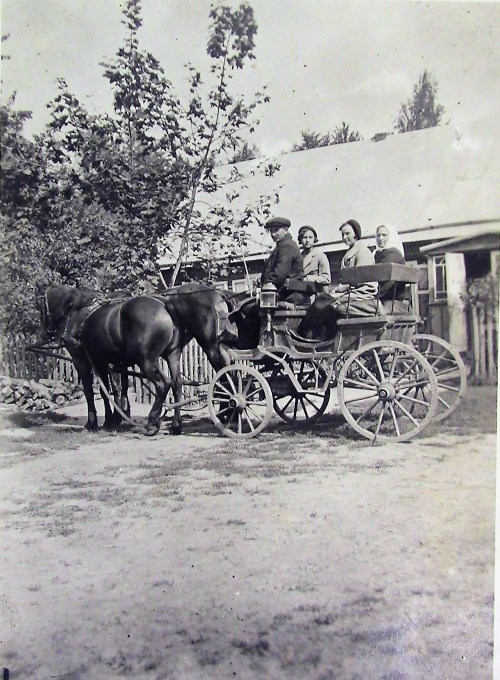 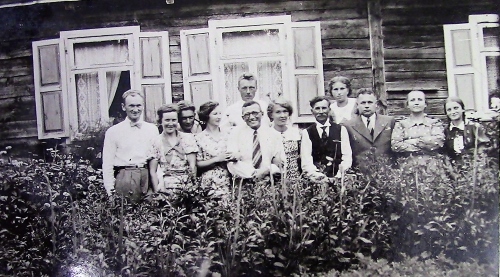 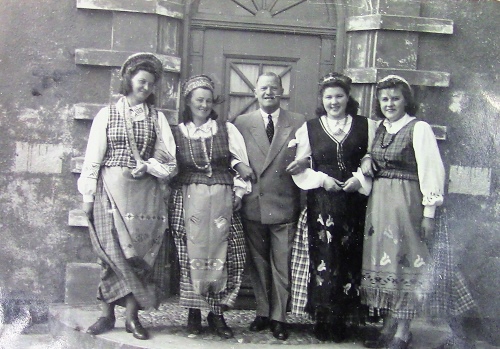 I was born in 1915 (?) in the village of Smilgiai in Vilkaviškis.  I had 2 brothers and 3 sisters. My parents were in an arranged marriage – as was the norm in those days.

I was sent out as a shepherdess to care for our animals from the time I could walk on my own.  From dawn ‘til dusk I was outdoors with the animals, come rain or come sunshine. There was one huge bull that everyone was afraid of except me.  He was my friend and would allow me to ride on his head while holding onto his horns. He would swing me back and forth. He was very kind to me and we would play together for hours.  I loved that bull.

I eventually finished 4 grades of school and when I was 14 yrs. old I was allowed to go to a technical school for 2 years. Here I learned to sew, knit, cook and how to keep bees.  I dreamed of going to high school – but that was not to be.

I eventually worked as a telephone operator in our local post office.  When Vilkaviškis was bombed one noon hour, I fled along with everyone one else in our town.  My parents stayed on our homestead and I remember the last goodbye. What a weird feeling – I kissed Mother’s face, and, as if by premonition that this was to be the last goodbye – my heart suddenly began to ache terribly.  And it was the last time I saw my Mom. It was 1944.

As we were fleeing along the highways, the German soldiers stopped us and confiscated everyone’s horses and wagons and told us we must now dig trenches at the Front.  I silently prayed hoping that I could break an arm and get out of this. And that is what happened – I was helping pull a wagon stuck in the mud when the wheel accidentally rode over my arm and broke it.  I was spared from digging those trenches. That has happened to me several times over my life – I pray for something and then it happens. That was my fate or my luck.

We ended up in DP camps.  There were many single young women in those camps.  Many hooked up with young men and got pregnant on purpose.  This ensured they could remain in the camps and be taken care of by the Red Cross.  I did not want to go this route.

My brother found an ad in a newspaper – Denmark was looking for farm labourers and would welcome refugees willing to work.  My sister Alexandra was the first to go to Denmark. Her neighbours, a German family, sponsored me to come as domestic help and that’s how I ended up in Denmark.  I worked hard for them for very low pay.

We stayed in Denmark only temporarily.  They were a small country and eventually asked the refugees who were not married to a Danish partner to leave the country.  They needed the jobs for the Danish now. So we were forced to leave once more.

We ended up travelling in a ship carrying wounded soldiers.  There were no beds so we slept sitting on the stairs. But the ship was crawling with lice and we would have to shake them off several times a day.  The life of a refugee is very hard. You experience all kinds of things.

My brother found ads in the newspapers saying Canada was accepting refugees.  So we applied to go and were accepted. I first ended up in Winnipeg.

There was no joy when we saw the shores of Canada for the first time.  It wasn’t Lithuania. It was a foreign and unknown land to us. We had no idea what we would find here.  You know, I even cried when I arrived – not tears of joy, but tears of sorrow.

Canada is a large and rich country full of all kinds of natural resources.  If you worked hard here you could make a good living for yourself and your family.  You could have a good future.

I was 39 years of age when I married and moved from Winnipeg to Toronto.  We spoke only Lithuanian in our home. We all remained patriots of Lithuania and put a lot of effort into raising our children as Lithuanians and keeping cultural Lithuanian traditions.  Outside of the home – speak whatever language you want, but inside the home – only Lithuanian.

We all wanted freedom.  We did not want to live under the Russians nor under the Germans..  We wanted to be Lithuanians in Lithuania. This is our birthright. If the Russians were not deporting people to Siberia – we may have returned home.  But we knew what would be our fate if we did return, so we left.