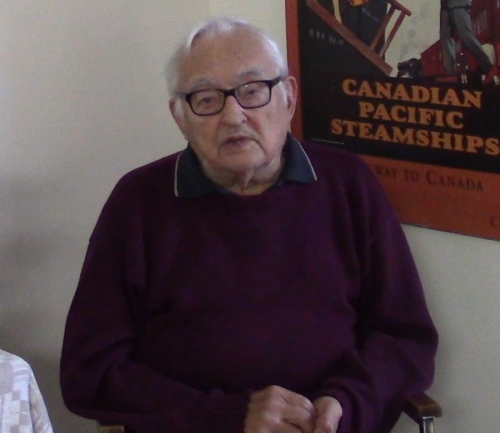 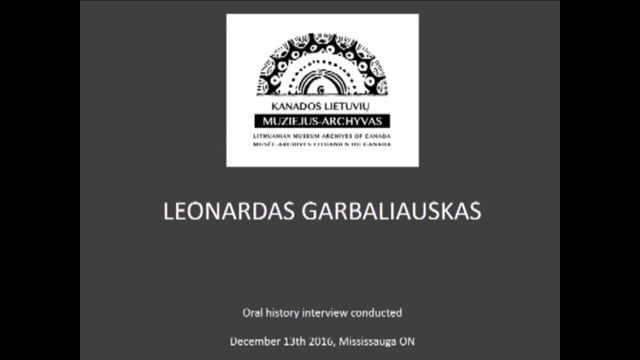 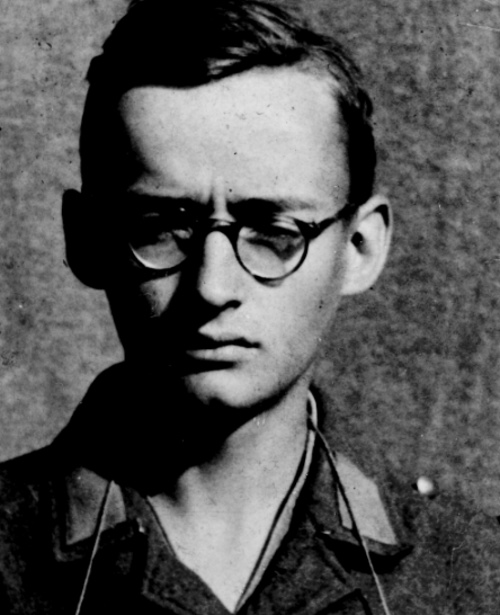 Leonas as a prisoner of war 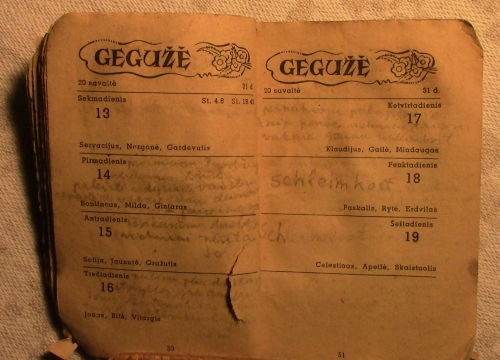 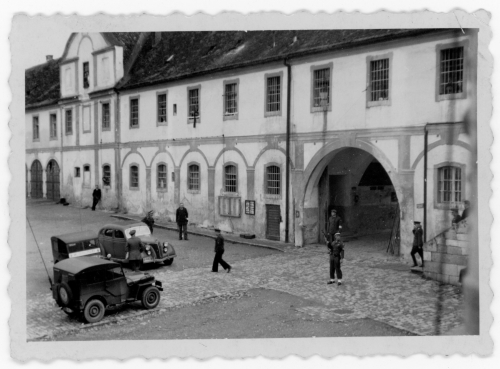 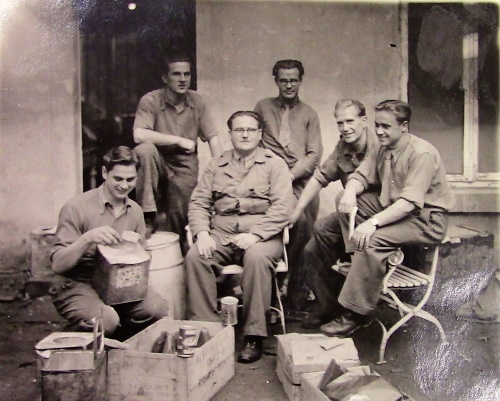 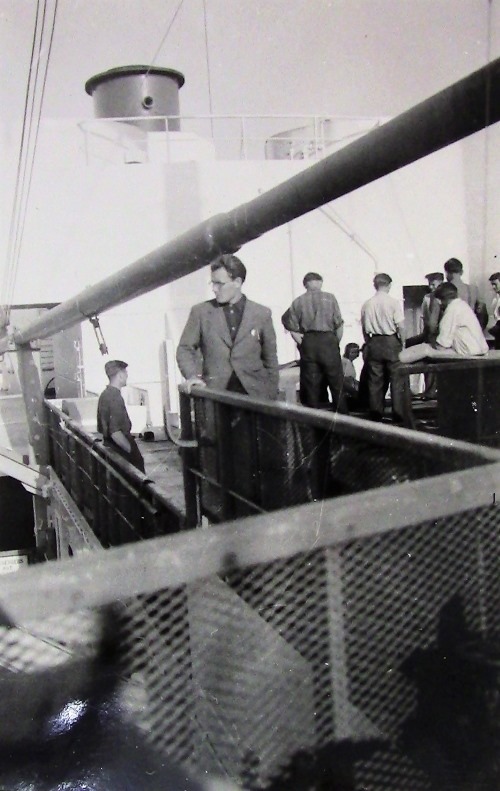 Leonas Garbaliauskas aboard the Protea 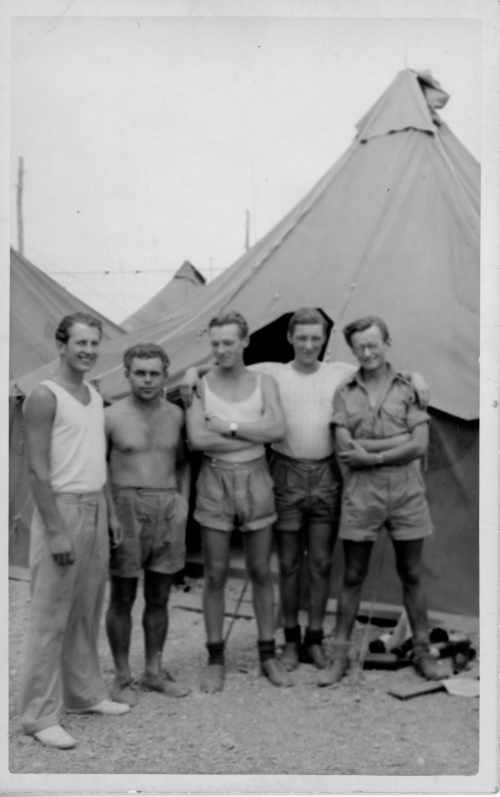 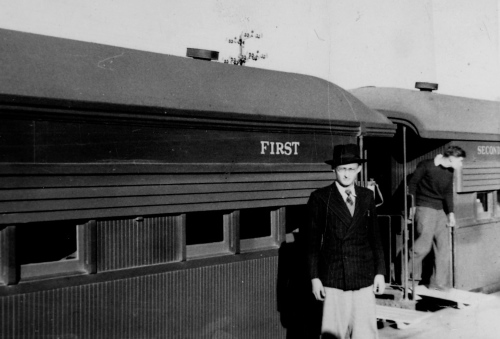 I was born in Kaunas, Lithuania in 1929. I completed 6 grades of school in Plungė Lithuania, grades 7 and 8 in Germany and graduated as an engineer from the University of Adelaide in Australia. I eventually came to work and live in Canada.

I was taken from the street:

When the Germans occupied Lithuania, I was 17 years of age. A German soldier saw me and came after me. He dressed me in a German army uniform and took me to Germany. Many young Lithuanian men were taken in this way to serve in the German work brigades. My job was to guard the oil refineries. My parents did not know where I was…they thought I had been killed.

We were stationed near the Eastern front in the town of Torgau. When the Russians pushed through the Front, we immediately fled on foot. We walked without stopping, even though we were exhausted, as the Russians were at our backs. My feet were covered in blood, but we walked on. We passed through Torgau, crossed the Elbe River and continued heading West. We saw Russians marching on the other side of the river with many farms and villages left burning in flames in their wake.

A prisoner of war:

My work brigade was assigned to Berlin, but the Russians got there first and blocked the roads into the city, so we were sent further West. Near Marzeburg we surrendered to the Americans. We were sent to the other side of the Rhine River and placed into massive camps – basically just open fields, holding over 48,000 prisoners, surrounded with barbed wire fences. Most were German prisoners. We received rations of flour and water – we didn’t starve, but our hunger was not satiated.

After several months, the Americans marched us out of the camp and handed us over to the French. They jammed us into freight trains with soldiers armed with machine guns guarding us from the roofs of the wagons. They closed and locked the doors to prevent the French from throwing rocks at us as the train passed through the countryside. I was assigned to a work brigade in the town of Modene near the Italian border, to find unexploded land mines. Many of us died this way.

I ended up a prisoner of all of them – the Americans, the French and the English. I then became a Displaced Person (DP) and lived in DP camps.

Enticement to return to Lithuania:

Eventually we were returned to Aix Leben. There, a Russian commission came to reclaim prisoners who were from the Soviet Union in order to return them to their homeland. During my interview I was asked if I want to return to Lithuania - to my homeland, to my family. I said I have no more home there and all my family has left – I have nothing to return to. Most in our group returned, but I was the only one who refused. I thought it was better to remain a prisoner of war here than to be sent back to Soviet occupied Lithuania.

I leave the camps:

Immigration from the DP camps did not begin immediately. After a few years, Canada, America and Australia started accepting refugees. Once Australia accepted me, I signed a two-year labour contract to work wherever the Australian government sent me. We left camp by train, got onto a freight ship (the “Protea”), crossed the Suez Canal and sailed on to Australia. By the time we reached the Red Sea, the temperature on board was unbearable. When the heat was intolerable, many would just faint and the ship’s machines would overheat and just stop working. So for 2 days we drifted in the Red Sea until a tug-boat arrived and pulled us to the Port of Sudan. We eventually made it to Australia.

I was accepted into the Faculty of Engineering at the University of Adelaide. Attending university was quite difficult for us. We found the language hard to understand and the methodology used to teach, quite different. We were worried that our studies in Pinneberg, Germany were useless and that we would be considered “stupid” by the Australians. But…I passed my first year and moved on until I graduated as an engineer and was offered a job with the Australian government.

Many Australians, after graduating, would do a major trip to see the world before starting to work. All my classmates left to work for a while in England, then went on to Canada and then returned to Australia. I asked where you could make the best money and they said: “Canada”. So I decided to go to Canada first – and there I “got stuck”. I arrived in Vancouver and stayed with my Aunt. There was a shortage of engineers and I landed a job with Carruthers and Wallace, a large consulting engineering firm in Toronto and so I moved there. I soon connected with some former high school friends from Lithuania living there. We would socialize together. It was through them that I met my future wife Dana and we established ourselves in Toronto, Ontario.