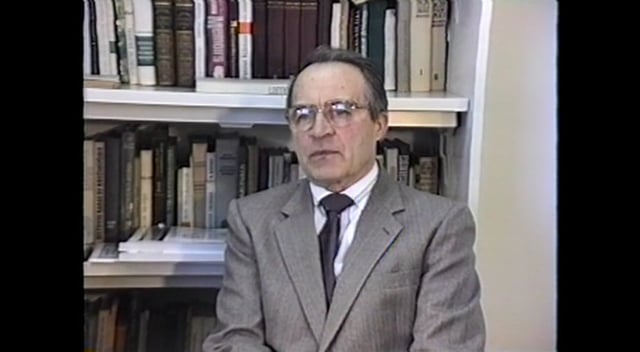 Interview was conducted by Dr. Rasa Mažeikaitė and filmed by Algirdas Pukas.

Lithuanian Museum-Archives of Canada, Mississauga, ON.  1990.

Summary of the interview:

I was born in Vareikiai, Lithuania.  In the Spring of 1944, when Lithuania was occupied by the Russians, I left for Germany.  Many young students stayed in Germany until the war ended in 1945.  We were housed in Displaced Person (DP) camps.  We lived there until 1948 and then emigrated to Canada.

I left Lithuania because we knew how our lives had changed when Russia occupied Lithuania the first time in 1939.  Within 3 months of occupation, food disappeared from the stores and we faced severe food shortages.  And then they started to deport people to Siberia.  They first took policemen, civil servants, lawyers, teachers, judges, all the educated people were deported to Siberia.  We knew it would be the same this time and we had to leave.  1944 was the best time to leave as the Germans were retreating from the Front and we could mix with them and make it into Germany.   When the war ended we knew it was dangerous to go back, so we waited to go anywhere but back home.

Set my sights on Canada

I had learned about Canada in school in Lithuania.  I had an uncle here so I signed up to go to Canada.  The first emigration was for contract work in the forests.  Canada wanted young strong men for labour.  Once we passed the screenings we got documents to emigrate.  We went from the DP camps to Transfer camps where we lived from October until February.  There were thousands of people in these camps.

Fears that we will be sent back

Our ship was the General Sturgis – a military transport ship.  Before going to the ship there was a panic in the camp.  We were in the chaplain, Rev. Šarka’s office and word spread that the Russians are coming to take us all back home – the whole camp by force.  Everyone wanted to stampede to get on the ship.  I had volunteered to work on the ship during our crossing, so I managed to get on board as a priority.  Our group of 29 worked in the kitchen, prepared tables, cleaned, prepared cabins.  We wanted to work and enjoyed being useful on the ship.  We sailed from Bremerhaven and as the ship left the shore many of us shed tears as we said goodbye to Europe and sailed into the unknown.

We sailed for one week.  During the week we celebrated St. Casimir’s day (patron saint of Lithuania).  We formed a quartet and performed songs on the decks.  In the middle of the Atlantic we encountered a huge storm.  It really frightened us. Word had spread that the General Sturgis had already been broken in half twice before.  But we survived.  After a few nights we started seeing ice and then the shoreline near Halifax.

After landing in Halifax we received food and were put onto the train to Pembroke, Ontario from where we went on to Geraldton.   Along the way we saw tiny houses with cars parked beside them.  The houses looked cheap but the cars were beautiful.

In camp we received a big surprise – the first meal they gave us was like a feast.  We had not seen that much food for many years.  There were fruits: apples, oranges, bananas, vegetables, steaks, various fish, cakes, deserts and we could have as much as we wanted.  All of Europe experienced hunger during the war.  We thought this meal was special, just for the first day, but the food continued every day.  It was like a party every day.  They told us to take whatever we wanted.

Build a dam across the Ottawa River

Our job was to build a Hydro Dam across the Ottawa River.  Shore-to- shore it was a distance of more than one kilometre.  We worked with picks and shovels and wheelbarrows.  The work was really hard.  We used to blast the granite and move the huge boulders by hand.  We learned the stone has a grain and to cut along the grain to break it up more easily.  We were not afraid to work.  I worked a lot of overtime.  My contract was for one year of work on the hydro dam project.

Standing up for our rights

One time my foreman asked me to come in to work on a Sunday – my one day off per week.  I questioned why and he said if I didn’t come he would dock me two days’ pay.  I asked to see my work contract since I did not receive a copy.  He said he didn’t have it.  So, I wrote a letter of complaint to Canada’s Minister of Labour in Ottawa.  The Minister wrote to my employer, but I didn’t know this.  An inspector came from Ottawa to see me, but since I had been moved to another job, he didn’t find me and he left.  My co-workers told me about this when I came back to camp that evening.  Since I had not heard anything, I wrote the Minister again.  Finally, with a friend who spoke better English than me, we both went to Ottawa and met with the Deputy Minister.  I told him that I am just trying to stand up for my rights as a worker.  He suggested I finish my work contract and explained how things work in Canada. I was very satisfied with the visit and the attention he gave to us.

I ended up working in the Nipigon area and worked 4 months past my contract.  The winters there were really cold.  Our faces would freeze as soon as we went outside.  My job was to unload wagons.  The Superintendent moved me to the lumber section.  It was a really good job.  We earned 60 cents an hour in 1948-49 and I saved every penny. When I completed working there, five of us went to Toronto. The company was sorry to see us go as we were good workers.  The work had been hard but we were happy.

Starting over yet again

When we came to Toronto we had to start all over again.  Jobs were hard to find.  I got a job, but it wasn’t a good job.  After 3 months they laid us off because they did not get enough orders.  There was unemployment insurance, but we didn’t know about it so we didn’t apply, so instead, we looked for other jobs right away.  I found a good job with Continental Electric.  The pay was good, but after a year we were laid off again, because the company did not have enough work.  I then worked in a skating rink – long hours and very low pay.  I would work 12 hours and got paid for 8.  I decided to go back to school to learn more English.

I then worked in a diamond factory making jewellery.  We made rings, chains, etc.  But once again, there were not enough orders and they had to reorganize the factory and many of us were laid off.

I join the Canadian army

I joined the Canadian Army reserves thinking it would lead me to better employment opportunities.  I worked with artillery.  I learned a lot, became an artillery board technician.  But I had hearing problems and had to leave.

Eventually, in 1951, I started my own business.  My friends and I worked with Toronto’s Lithuanian Scouts and through them established contact with the Canadian scouts.  When they found out I was looking for a job, one of them invited me to go into business with a group of them.  I had saved $3,000 cash.  We 5 became partners, put together $15,000 cash and bought a store.  I thought, I am young and strong and if I lose that money, I will make it up again.  I know how to save.  At that time no one gave credit.  We started our business with our own savings.  It took a lot of hard work, but we renovated the store and we made progress every year – bit by bit.  We created our own job and worked at it for the next 35 years.  We were never in debt.

I am now retired.  I have 3 children, two of whom are in university and one in high school.  I am hoping that they will have an easier life than I did.  My wife is still working in a library.  Life is good and much easier now.  Our only worry is the children.