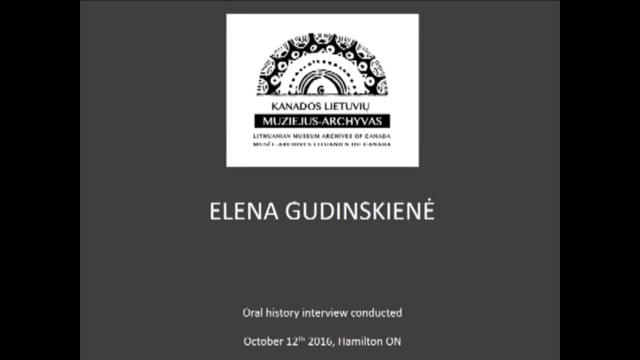 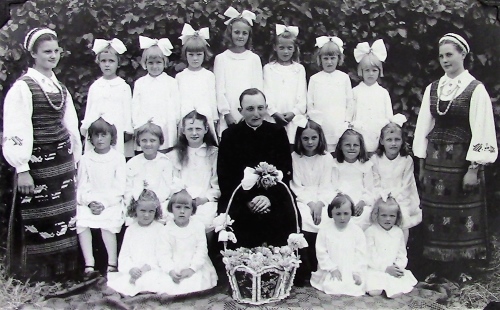 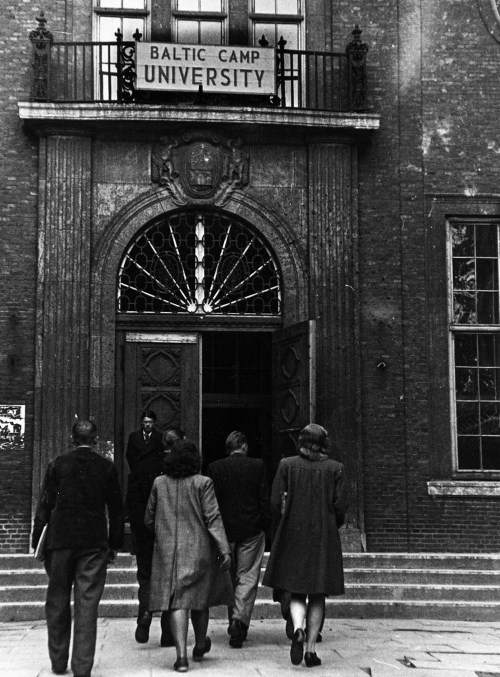 It was around 1939-1940 when my Father fled from the local communists in Lithuania.

The communists were taking over farms, homes and stealing everything they could. Father thought he would be gone for no more than 3 days and ended up near the German border.  There he learned, from people who were fleeing in droves, that we had been forced out of our home. Our farm was on “no man’s land” – in between the Russians and the Germans. He got a bicycle and came back from Germany to find us.  He got a horse and wagon and a cow and loaded us up onto the wagon and we left for Germany. En route we usually slept overnight in farmers’ barns. We made our way slowly, deeper and deeper into Germany.

We ended up in a manor home.  Dad and the horse worked their fields in exchange for us being allowed to stay there.  I was too young to work. Russian prisoners of war were brought in to peel potatoes and, in the evenings, I would listen to their sad, wistful and beautiful songs of longing for their homeland.

Dad would get news of the advancement of the Russian troops and as soon as he learned that they were nearing the place we were in, we would move out.  He would always try to keep us ahead of the advancing troops. We eventually made it to Rottenburg and learned of a DP camp for refugees, so we went there.  We learned that there were 3 DP camps with many Lithuanians in them in Oldenburg, so we went there. We lived in barracks and our family’s living space was separated from other families by dressers.  We ate in a common dining room and used a common kitchen to cook our food. We usually got United Nations Refugee Relief Association (UNRRA) food packages and some rations from the camp. But people sold or traded what they could to supplement these rations with food from the local farmers.  We also worked keeping the camp clean in exchange for our lodgings.

Life in the camps:

The DP camp at Oldenburg had a high school.  I enrolled immediately and eventually graduated.  I learned English. I went on to Detmold where I trained to work in kindergartens.  When I finished, word came that a Baltic University was being established in Pinneberg, so I enrolled there.

While at University we heard that Canada was accepting refugees.  Men went to work in forestry and women went to work in hospitals or as domestic help.  We were so afraid of the advancing Russians that everyone who could, signed up to go to Canada.  We were asked by the selection commissions what work experience we had, so we said we knew everything, knew how to do anything and everything that needed doing!  But in fact we were coming straight from school and had no work experience at all.

We were young – afraid of nothing – we had no real worries.  We all helped each other out however we could.

A housemaid in Canada:

Upon arrival in Canada I was sent to work as a housemaid in a doctor’s home.  The family was very good to me. They even allowed me to prepare the traditional Lithuanian Christmas Eve meal called “Kūčios” (a fish-based meal without meat or milk products).  But they served steak and I didn’t know what to do... Meat was not allowed at “Kūčios”.

We stay in Canada:

We ended up in London Ontario and stayed close to our community of Lithuanians.  Sometimes the Estonians or Latvians would join us for special celebrations. But we did not really mix with the local Canadians.  My Father had been sponsored so he had ended up going to America and when I got married, he invited us to move to the US. But I felt comfortable and established in Canada and didn’t want to go anywhere else, so we stayed.

A family of Lithuanians:

I raised my family as Lithuanians.  We followed Lithuanian cultural traditions. We were active members of our community in Hamilton, Ontario and of our Lithuanian parish.  I loved weaving and listening to Lithuanian records and the weekly Lithuanian radio show. We sent our sons to Lithuanian summer camps, enrolled them in the Lithuanian heritage “Saturday School” and folk dance group, etc. so that they would have a good time amongst their Lithuanian friends.  It is unrealistic to expect that our children would have the same level of commitment to Lithuania that we had – this would be expecting too much of them.

When we came to Canada, we expected to work for what we got.  We did not expect to “get something for nothing.” We came because we had to flee Lithuania.  We had to build our community here in Canada by ourselves – we built our churches, our community centers.  Present day immigrants come expecting to have everything given to them. Present day newcomers find everything already built and in place and ready for them.  Canada has done a lot for immigrants, but there is a limit. Canada is now doing more than it needs to do.