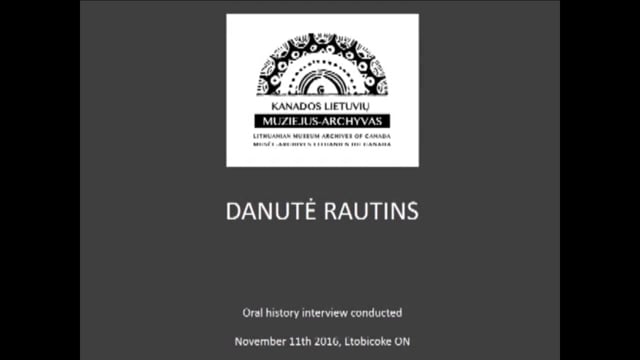 I was born in Panevėžys, Lithuania in 1923.  I worked at whatever jobs I could get and eventually studied music and became a music teacher with the Royal Conservatory of Music in Toronto.  My students were “tops” and won many awards for their performances on the piano. This gave me much satisfaction and pride.

We endured much hardship – we were lost:

My Father Ignas Pašilys was a Lithuanian military officer in charge of the Zarasai district. (He now has a street named after him.)  My Mother worked in medicine, but died of a heart attack at a young age and I was left as an only child. Father kept being deployed to various parts of Lithuania and I went with him – as a result I had few close friends – my friends kept changing.  My Father had a tragic end. He was martyred as a prisoner of war and he died after being tortured in prison in Zarasai.

When Lithuania was invaded, we all fled taking nothing but the clothes on our backs with us.  I took nothing with me and yet, I was robbed. I have nothing that I brought from Lithuania. I ate what I could, when I could get food.  It was a very difficult and sorrowful time. We endured much hardship. We were lost.

I came to Canada with nothing.  I was not sponsored – I had no family or friends to sponsor me.  It was a very difficult beginning. We totally depended on the good will of  the people around us. I went where the wind blew me and worked wherever they sent me.  I eventually got a job as a kitchen maid in the Prime Minister of Canada’s residence in Ottawa.

Canadians were not pleased with this flood of refugees – they feared we would take away their jobs.  We were treated like second class citizens. Some Canadians were outright mean to us and looked down on us as “those DPs – yech!”

I am a Lithuanian:

I was born in Lithuania as a Lithuanian.  My whole past, everything that in life was good, I experienced in Lithuania.  I consider myself to be a Canadian Lithuanian. I wanted to pass the Lithuanian identity on to my children – it was important to me, but not to them.  My husband was Latvian – so that posed some challenges too.

I would like my children to consider themselves to be Lithuanians, but I leave it up to them.  I am only sorry that they do not know Lithuania. I think we may have demanded too much of them in terms of our hopes that they would see themselves as Lithuanians and that this scared them away…

I am grateful to Canada.  I made myself a good life here and that is a huge thing!