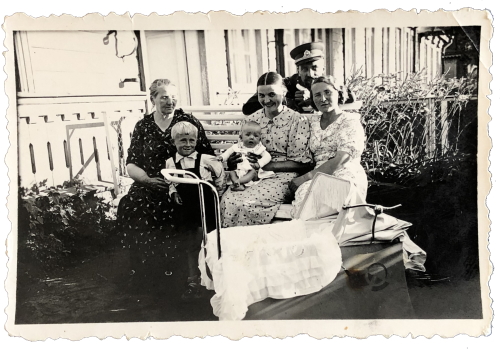 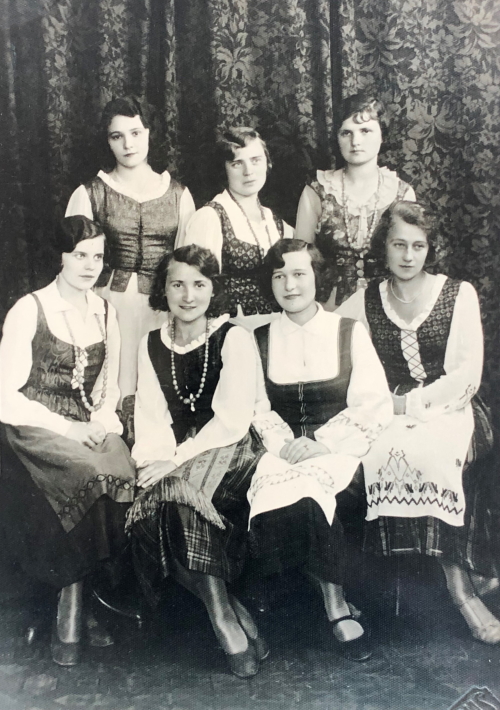 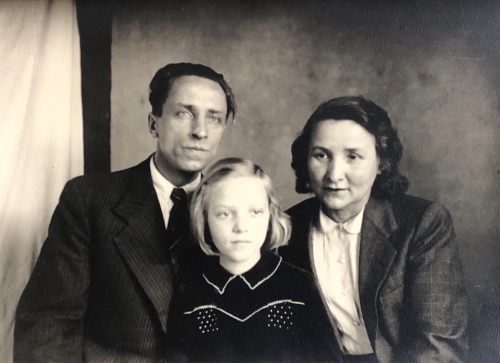 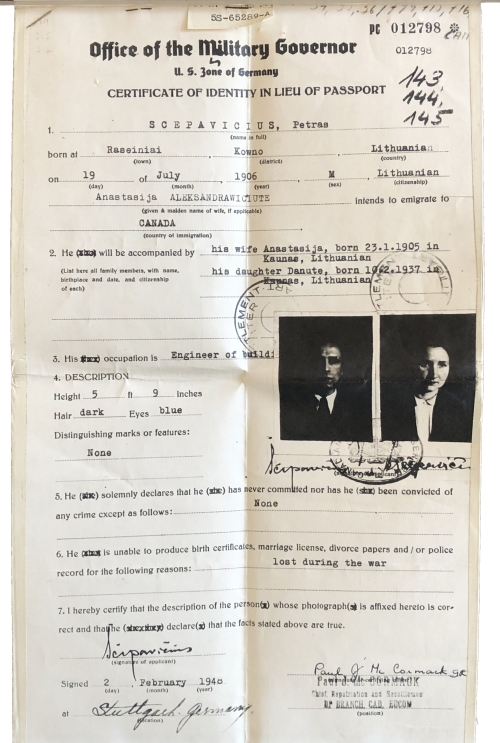 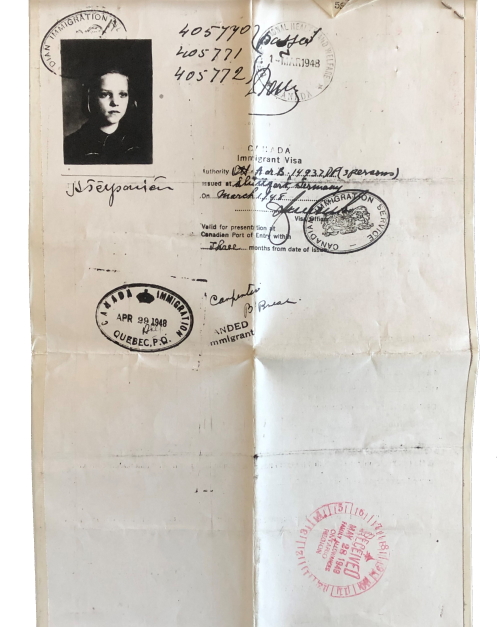 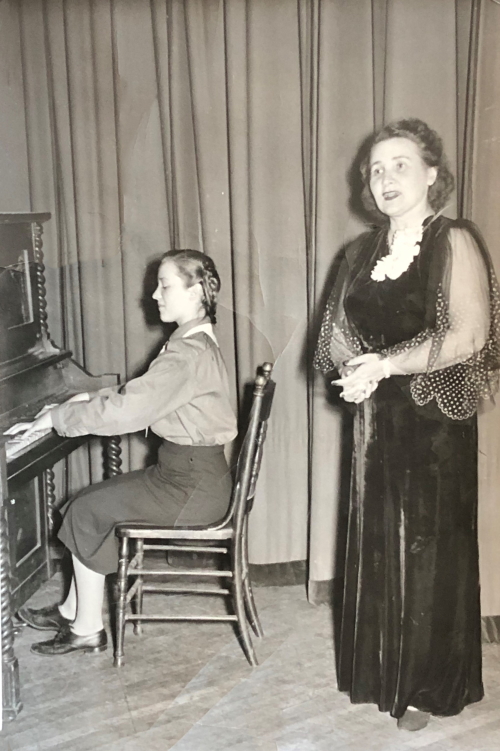 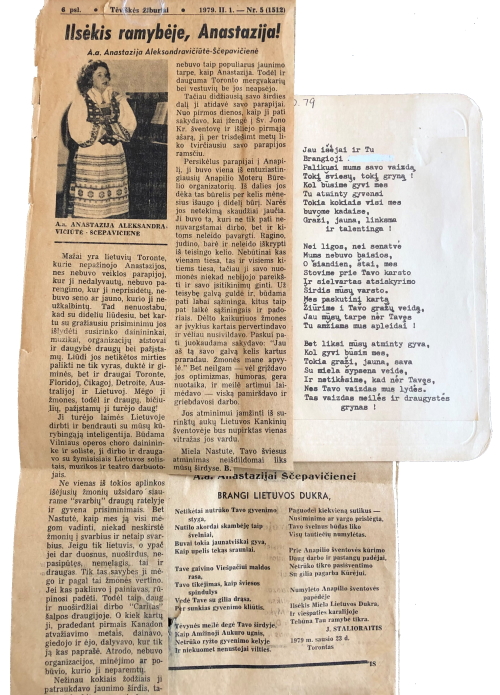 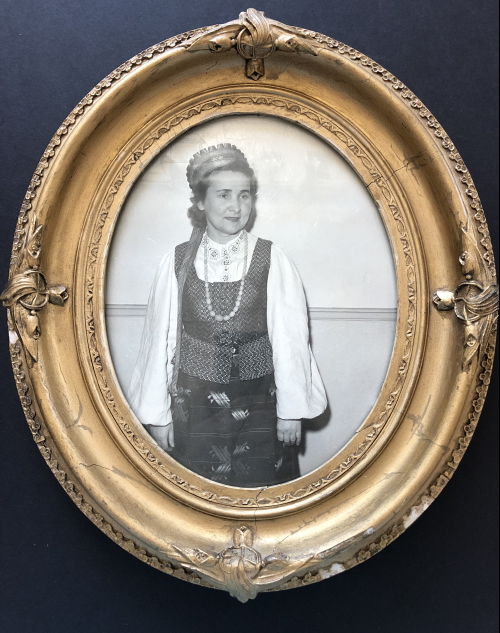 Issuing affidavits to help others come to Canada

We have been in Canada now for three months.  God helped us find Ona Jackevičius (you remember her as “blondie” – at least that’s how you used to call her) in 1939.  She left on an excursion to America.  She is now married and has a boy and a girl.  They’re doing well.

During the first week here, Peter got a job per his specialty, I got a job in a sewing factory.  Dana is studying in school.  In general, everyone in Canada works.  They all seem to get along well, have good homes, an automobile and money in the bank.  Both husband and wife work.  This seems to be the norm here.

Simas, I recall that you said you had a brother in Canada. Write to him and ask that they sponsor you.  If you’d like, send me his address and I will go talk to him personally.  Almost every Lithuanian over here has sponsored people and prepared 2-3 affidavits.

Life on the passage to Canada

Although it is now 3 months that we are in Canada, I will not begin our story from the beginning.  As you know, we stayed in Diepholz for 3 weeks.  Life there was not pleasant.  We left Diepholz at 6 am on April 19th, 1949.

Bunk beds on the ship

We arrived in Bremenhafen at 11 am.  We each got a number that was hung around our neck.  There were many ships in the harbour and we started a guessing game – which one will be ours?  After about half an hour they lined us up and told us to board our ship (the Beaverbrae).  We each got another number that we hung around our neck.  The ship’s staff separated the men from the women and children and led us to our separate quarters.  Here we each got a bed assigned to us by number.  The beds were bunk beds, they were very clean and the bedlinens were pure white.  There was a pillow and a bowl for seasickness on every bed.  The sleeping quarter was a huge room containing around 150 bunk beds.  From this you can tell that our ship was no cruise ship, but, it meant that passage was relatively inexpensive as for the three of us we paid 480 dollars.

Eat as much as you want

They gave us lunch at 12 noon.  The food was excellent: soup, three huge potatoes, sauerkraut, mustard, coffee with milk and sugar, buns with marmalade.  We thought this was just a special occasion welcome meal, but they gave us the same excellent food every single day.  We also got fruit every day.  We could eat as much as we wanted.  In the evening they served two kinds of fish, baked potatoes, coleslaw salad, buns, marmalades, coffee and oranges.

We sail away while the orchestra played

Around 9 pm the ship’s orchestra began playing  "Sorento"  and then a march.   We were congratulated on becoming future Canadians and they lifted the anchor.  Gradually we set sail from the shore.  All of our faces were very solemn and many of us had tears in our eyes.  That night everyone was very somber.  We reached the shores of England the next evening.  The ship took on a new captain and we began our journey across the Atlantic.

Because our ship was fairly large, no one got seasickness on the first night.  Breakfast was served from 7-9 am:  bacon, eggs, sweet cereal with raisins, buns with various marmalades and coffee.   After breakfast we had to put on our life jackets and learn how to secure them.  At 12 noon we had lunch – also very delicious and plentiful and at 6 pm we had dinner.

After dinner we each received a carton of American cigarettes and a kilogram each of: candies, biscuits and assorted snacks.  On Sunday they took 400 chickens out of the ship’s refrigerators and we were served huge portions of chicken for lunch.  In other words – the food on the ship was great.

That evening, the weaker folks began succumbing to seasickness, especially our Jewish travellers.  All in all we were 1,000 passengers on board.  Our family did not succumb so quickly – we kept taking pills and drinking cognac.  I had every confidence that I would not succumb.  Oh by the way, the rules on the ship required that after breakfast everyone stay on the top decks.  It was only after 2 pm that we were allowed to go below to our bunks to rest.

On the third day of sailing, so many folks were seasick that of the 1,000 passengers on board, only a few showed up in the dining room for meals.  I found myself amongst the majority who were sick.  Peter and Dana were also sick for 3 days, but their sickness was “light”.  Whereas I got the severe form and thought I was going to die.

I awoke at 6 am confused and wondering where I was.  All around me I could hear sounds of women and children getting seasick.  At the same time there were sounds of crying and wailing.  You know me well, so you should not be surprised when I tell you that I joined in all the cacaphony.  The Captain rushed in and told us we must go to the upper deck for air.  Really...go where? when you can’t lift your head and it’s impossible to make those feet touch the ground!  The ship was tossing pretty violently.   It was only with the help of a couple of men that some husbands were finally able to bring their wives upstairs.  My Peter was among them.  With Dana’s help they brought me as I was, partially dressed without shoes, onto the deck.  I felt better once I felt the fresh air on my face.

Next morning only about 50 people made it into the dining room for breakfast.  The staff immediately started serving hot water with lemon, but that didn’t help much with our seasickness.  All I had on my mind was a keen desire to die in order to end this torture as quickly as possible.  I was one of the lucky ones.  I had two people, Peter and Dana, to care for me.  There were cases where entire families had fallen ill and had no one to look after them and had no news of each other for 3 days. Everyone who made it to the top deck, stretched out on the floor or across several deck chairs and just slept.  After 3 days, our sickness passed and we were back to normal – healthy and jovial, in spite of the ship still listing severely.  But our bodies were now accustomed to the motion.  The motion on the ship was so severe that even the ships crew was not spared – many of them also fell ill.

Oh that this would end quickly

Seasickness is viscious and can only be fully understood by someone who has also experienced it personally.  It usually lasts 2-3 days.  There were passengers who went to the ship’s hospital asking if there was any way they could just end their lives in order to end this as quickly as possible.  The Jewish passengers were particularly impatient and suffered severely.  One of them said our ship was the last transport from Europe.  He said he will write to people he knew in Europe and tell them not to come – the passage is too difficult to endure.   He had wanted to sponsor his brother, but now he won’t do it in order not to put him through this.  Another passenger was pale as can be.  A lady approached him and asked if she could bring him a tea or coffee?  He said to her:  “It would be better if you could throw some solid earth beneath my feet...that would give me relief.”  Seasickness was difficult to bear.   But once you got over it, you were fine.  In hindsight, it even offered the opportunity to tell some funny stories.

A whale and fish entertain us

In general the sail across the ocean was long and boring, because everything begins to look the same.  There was a cinema on board, but few people went to see the movies.  We rather stayed on deck.  Once we saw a school of several thousand fish, just 2 meters away, darting around our ship as if they were on the attack.  This lasted 10 minutes.  Another time we saw a black giant in the water.  We determined that it was a whale.  There was no danger and brought us much joy and laughter.

Most days all we saw was water and sky.  Each evening we would turn our clocks back an hour.  While you are already sleeping, we are watching the sun beginning to set.

Mountains of ice surround us

On the morning of the eighth day of our journey, we ran into a dense fog.  The ship’s crew got word that mountains of ice were heading towards us.  This news caused us concern, especially because of the dense fog.  Our ship either stopped or would proceed extremely slowly.  Around noon the sun began to shine and once the fog lifted, we saw the most incredible and beautiful sight.  We saw mountains of ice all around us - icebergs.  We no longer had any fear as our ship sailed smoothly through them.  We marveled at the wondrous sight that we were lucky enough to behold – a once in a lifetime event for us.

From Quebec City to Toronto

After sailing for 10 days, we disembarked in Quebec City.  We were then taken to the waiting trains and boarded them according to our destinations.  Our train was very comfortable with soft seating.  We were fed a Canadian lunch in the restaurant car on the train.  Everyone received two dollars and the trains left the station.  Amongst the travellers there were families, including some Lithuanian families, who would ride the train for 7 days before they reached their destination. We travelled one full day and reached our destination – Toronto.  In Toronto we were met by a crowd waiting for people on the train.  Amongst them was my friend (with a gift for us - a bag of oranges) who took us to her home and here we started our new life.

I am sending this letter by airmail, so I must keep it shorter, so I will end it now.  This letter tells of our passage to Canada, but now you must tell me what interests you – please write and bit by bit I will be happy to tell you more.  Please share this letter with all my friends.

Sending you many kisses – your Nastutė