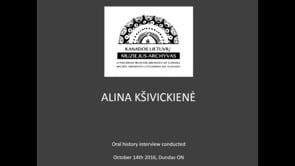 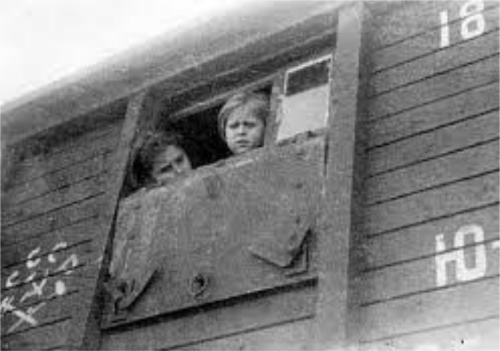 A family being deported to Siberia 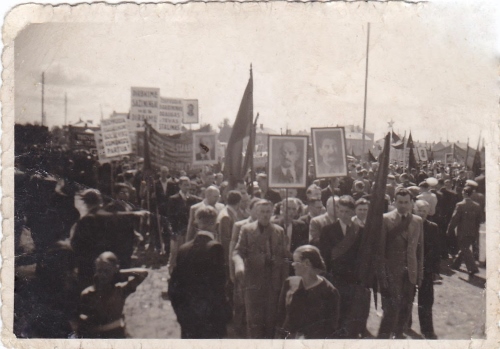 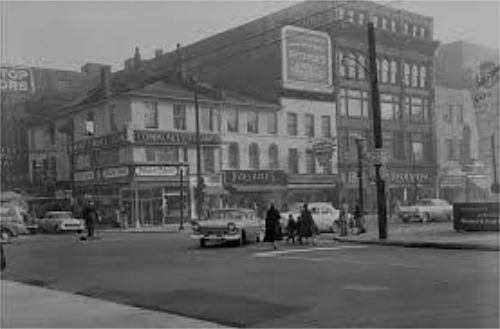 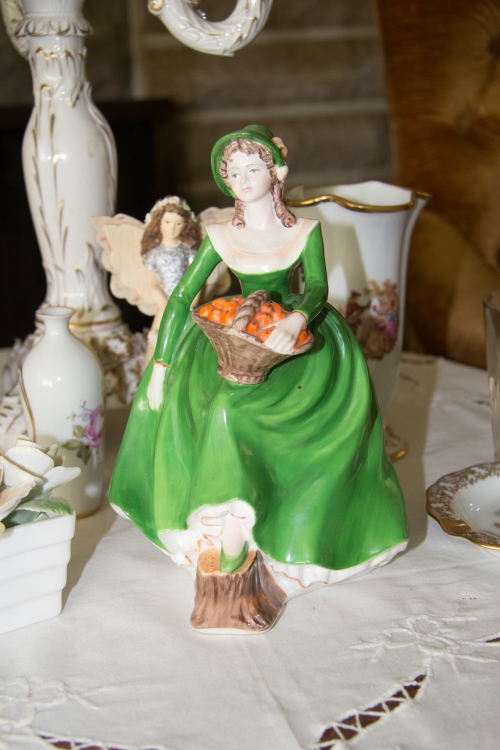 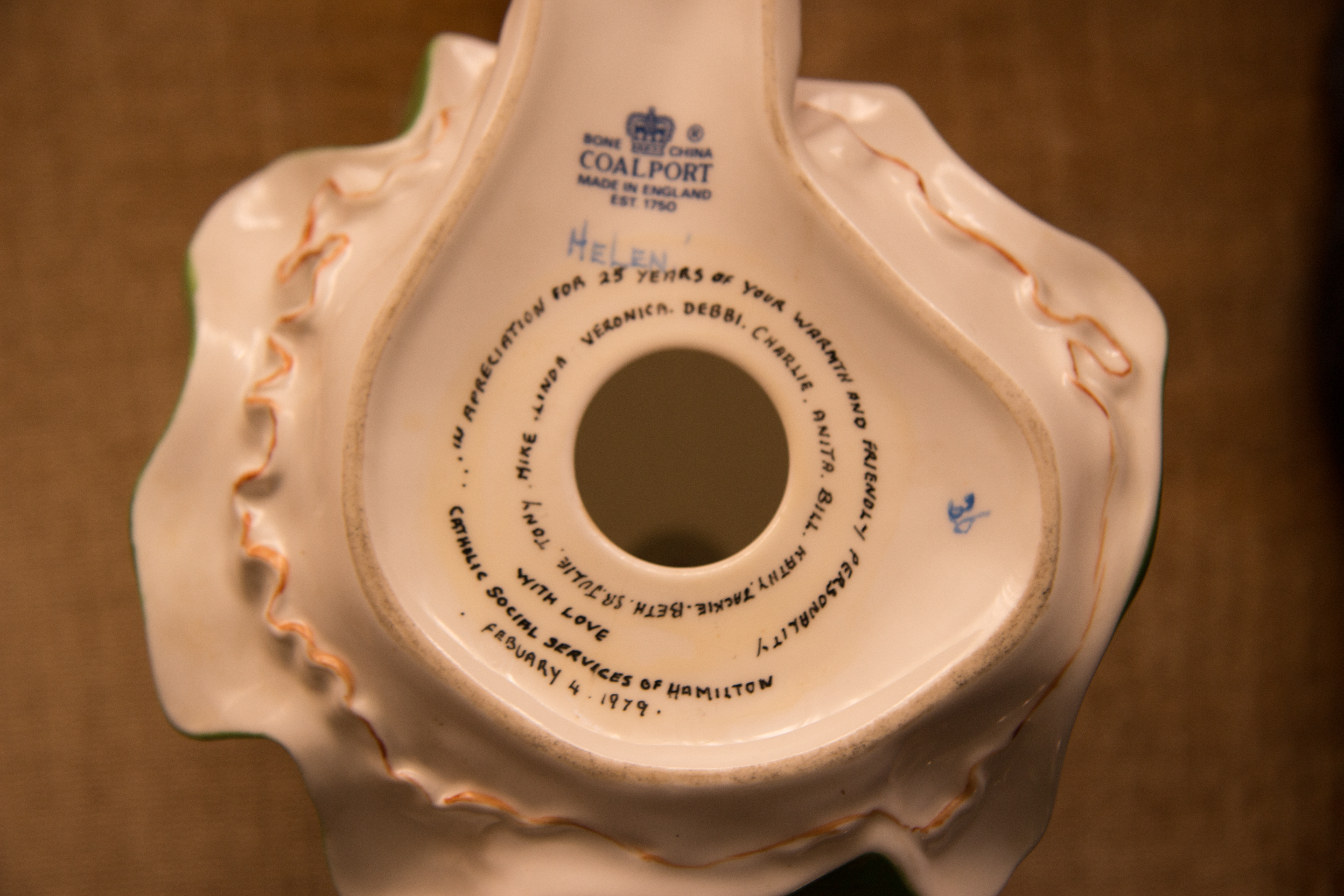 Service award presented to Alina Kšivickienė for her long service as a psychologist at the Catholic Social Services Agency of Hamilton.

I was born in 1917.  In 1942 I graduated as a physcian.  When I started my residency, I got married to Jonas.   About this time, the Russians marched into Lithuania for the second time and occupied the country.

Russia invades for the first time:

During the First invasion of Lithuania by Russia, in 1941, many families were deported to Siberia.  My father was a lawyer and worked in the justice system under President Smetona.  The intelligencia and professionals were the first targets for deportations.  During the night of June 14th, 1941 soldiers banged on the doors of our home and told us to get dressed and prepare for evacuation.  One soldier was kinder than the rest and he quietly told us to bring warm clothing and as much food as we can.  And my family was taken away to Siberia.  One of my uncles survived only one year and died in Siberia.  The second one lasted a year and a half.  An aunt also died there.  Only one aunt survived.

On Labour Day in 1941 in Kaunas, all students and workers were forced to march in a massive parade and shout “Urah!!”  My husband Jonas was selected to carry Stalin’s portrait, but he refused.  As a result, he was placed on a list of undesireables.  (I was already on such a list because I was from the bourgeoise class – I was from a family of professionals and was a professional myself.)  That’s how it was under the Soviet system – if you are not with us, you are against us and must be eliminated.

In 1942, Churchill was in no hurry to assist the Russians and their advance stalled.  Meanwhile, the Germans kept advancing towards Moscow.  The West then realized they need to fear the Germans more than the Russians and so the French, English and Americans joined Russia in the war effort against Germany.  With the technical and air support from the Western allies, Russia pushed the Germans back and marched into Lithuania.  They invaded Lithuania for the second time.

The Russians gave then-Lithuanian President, Antanas Smetona, 12 hours notice to respond to their ultimatum before sending in the Russian troops.  Smetona called a meeting of his Cabinet to strategize what Lithuania should do.  The Defence Minister,  Mr. Raštikis said we are too weak and cannot go to war against Russia.  Smetona wanted Lithuania to resist.  Raštikis said there would be too many deaths and we will be overcome.  In the end, both of them, together with their families, fled to Germany.  The Lithuanian army went to battle on their own, with no commander in charge, against the Russian troops, but in the end had to accept the Russian ultimatum.  Russia sent in their troops and occupied Lithuania.

I was in the streets of the city of Kaunas (Lithuania’s Capital city at the time) when the Russian troops came marching in.  They looked terrible – almost savage.  They had no shoes or boots, but rags tied around their feet. They were hungry.  My sister started weeping – she felt so sorry for them.  But they were met with joy and bouquets of roses were heaped upon them by many many young Jewish girls.  After being persecuted by Hitler, the Jews thought anyone will be better than Germans.  So they welcomed the Russians.

In the labour brigades:

When the Russians invaded Lithuania for the second time, Jonas and I immediately made plans to flee to Germany, but we were too late.  All the borders were closed and no one got through.  The only way out was to sign up for the German labour brigades to support the war machine and so, that’s what we did.

We were taken to the labour camps near Vienna which was under German control at that time.  There we admitted to being a physician and an engineer.  There was a shortage of both professions, since many had been sent to the Front.  I was sent to work as a physician in Tiuringen and Jonas to work as an engineer in Eisenach – a steel manufacturing city that was bombed every second night.  I was assigned to work in the hospital.  The hospital had a huge red cross on its roof and was not bombed.  I worked in the cardiac department right until the end of the War.

Since Germany lost the War, it was sectioned off into zones: the Eastern zone was given to the Russians, the Southern zone to the Americans and the rest was divided into the French and the English zones.  Jonas and I ended up in the Russian zone.  The Russians were savages and behaved like animals.  They raped the women – young and old.

The Americans took pity on us and took us into the American zone.  We were housed in Displaced Person (DP) camps.  I worked as a physician for 4 years and was valued as I spoke Russian, Polish, German and Lithuanian.  UNRRA supported us.  Eventually they gave our zone over to the Russians.

The blockade of Berlin had started and everyone felt they had to flee again.  Emigration had started.  We had no family or connections anywhere.  Canada was not looking for specialists or professionals – they wanted labour.  So we signed up to work as farm labourers and were accepted by Canada.

We sailed into Halifax where we were processed according to our one year labour contracts.  During the interview the official determined Jonas could work as a chemical engineer since there was a shortage in Canada.  There were no exams or internship required of him – simply an interview with the professional association.  Meanwhile, I was told I would have to pass qualifying exams and re-do my residency in order to work as a physician and residencies were scarce and I would have a difficult time finding one.  Because Jonas was released from his contract and we were married, they also released me from my contract as a labourer.   We went to live in Hamilton, Ontario.

We don’t want women in medicine:

The first year I worked in a factory ironing clothes.  I learned English.  I was determined to find a residency so I went to the General Hospital in Hamilton with all my documents re my work experience, diplomas, letters of reference.  The Director didn’t even look at a single one and told me: “I know why you are here and I must let you know that we don’t want women and anyway, we would give priority to Canadians who have finished their qualifications in Canada.”  I then went to St. Joseph’s Hospital.  The Director was a nun.  She asked if I was married and when I said yes, she said my duty is to have children and raise a family, not to work outside of the home.  She said she has a 2 year waiting list for residencies and that she will call me if something comes up.  So I left.

I had to do something.  So I decided to pursue my second area of interest – psychology.  I had been trained in psychological profiling.  I checked in with the Psychological Association and learned that my training would be recognized but I needed to add a few university courses.  So I registered with McMaster University and after completing one year of studies in statistics I met the requirements and was employable.  At age 34 I got a job with the Catholic Social Services Agency in Hamilton and worked there until 1984.  I worked as a psychologist.  Many new immigrants had many psychological problems: stress, trauma, marriage counselling, family therapy.  Because of all the languages I knew, I also became a Family Court translator and served as translator to the physicians in the hospitals.

I hate communism – it ruined my life and destroyed my country.

In the first 5 days of the occupation, the Russians deported over 7,000 people to Siberia.  They took political prisoners out of the prisons and tortured them to death in the streets and left them there for the general population to see what happens to dissenters.  I know of two surgeons who were dragged out of their operating room in the middle of an operation and were tortured in the streets and left there to die.  Who knows why?

Yes, the ordinary Russian is a good, warmhearted and helpful person.  I don’t know what happens to those who come to power...But something changes.