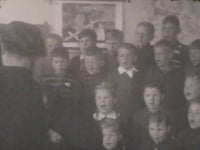 Displaced Persons camps were temporary facilities established in Germany after WW II to house refugees. Concerned about their children's future, Baltic refugees organized classes for a population of elementary school students that reached 4,150.
(number as identified in Lithuanian Encyclopedia vol. 5)

This video does not have sound.